They have black hair, with golden-yellow eyes (the main difference from the Haine twins who have grey eyes).They wear white shoes with pale yellow trim, and elf-ear-like earphones.

Rei wears long gray pants a black vest, and a black sleeve. His hair is let down (unlike Ren's, who's hair is tied up identically to Len's); only the back is shoulder length, while the front is short. Rei is intelligent, but with a gruff and hard-headed personality. He has a habit of saying ルイに触るな! ('Rui ni sawaru na! roughly translated as "Don't touch Rui!").

Rui wears a gray skirt. She also has a black vest, with a ragged white undershirt, and black tights. (Her hair is similar to Rin's, being both shoulder length and posessing clips.) However, she does have a flaw: her impulsive yandereness. This comes from her overprotective streak for her brother.

Rui and Rei are conceptualized by Hanepochi, the same person who created Kizaito.

Rui's voice is Rin pitched higher while Rei's voice also comes from Rin, but pitched lower pitched (like Kagamine Rinto). The Creator of them said it their self that they were both pitch changes Rin. This what differenciates them from Haine twins, which have Len pitched down for Ren and Rin pitched down for Lin.

So far, there is no original song nor special voice configuration for them. The fans usually only pitched the song to get their voice. 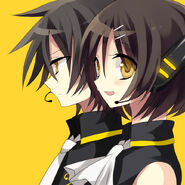 Add a photo to this gallery
Retrieved from "https://fanmade-vocaloid.fandom.com/wiki/Kagene_Twins?oldid=4721"
Community content is available under CC-BY-SA unless otherwise noted.